Since beginning operations in February 2016, exports from Sabine Pass LNG on the Gulf Coast of Louisiana have flowed at high utilization rates. More than 100 cargoes have already been shipped from the terminal and besides a 3-week shutdown for scheduled maintenance in November, the project has operated at near full capacity.

The high output has been driven by persistently favorable global pricing dynamics for U.S. LNG. Through the winter in particular, differentials between U.S. and global gas prices reached a maximum of $3.40/MMBTU in February. Unsurprisingly, Sabine Pass loaded 32 cargoes during the first two months of 2017, as offtakers Shell, Gas Natural Fenosa and Cheniere itself, took advantage of attractive netback margins into multiple markets.

In contrast to much of 2016, when the bulk of cargoes were directed to South American markets, many winter cargoes were shipped to Asia, where peak winter gas demand in key markets resulted in premium pricing.

Heading into summer, the outlook for U.S. LNG exports is cloudier, as the differentials between markets are poised to shrink considerably due to pressure on both sides of the equation.

On the U.S. supply side, EVA’s short-term gas modeling shows a high probability of a considerable Henry Hub price spike through the summer months. Already, U.S. supply/demand balances are tightening, with upward price movement averted thanks only to exceptionally mild winter weather.

Low 2016 Henry Hub prices were welcomed by U.S. LNG offtakers, but the effect on the domestic market was to drive gas production down nearly 4 BCFD through 2016. While output has somewhat stabilized through the first few months of 2017 amid rising gas-directed rig counts, the level of investment appears insufficient to drive meaningful production gains in the near-term.

Structural U.S. gas demand, meanwhile, continues to rise, the result of considerable additions of new gas-fired power plants and the rapid ramp-up of pipeline exports to Mexico, not to mention LNG. Thus, assuming normal weather patterns, the market is primed for tightening, with EVA expecting Henry Hub prices to jump from the current $3.15/MMBTU range to $3.85/MMBTU for July through the end of the year. Notably, these would be the highest U.S. prices since summer 2014.

While the U.S. market is tightening, most major global markets are loosening. The trend is partially seasonal, as the Northern hemisphere transitions to summer. Yet, other factors are at play, as well. In the U.K., a record amount of Norwegian pipeline gas is being imported, while Russian pipeline gas continues to surge into NW Europe.

In Asia, Japan and Korea—the world’s largest LNG buyers—are well supplied, while early-2017 imports into China and India have been slightly down over the same period last year.

Finally, the U.S. is not the only LNG exporter ramping up operations. In addition to Train 3 at Sabine Pass, the ninth train at MLNG in Malaysia came online in January, followed by the PFLNG project in March. The third train at Gorgon LNG in Australia also came online in March. A few other trains, including Wheatstone T1 (Australia) and Yamal LNG T1 (Russia) are set to come online over the next several months, exacerbating the LNG supply surge.

However, despite the many dynamics squeezing U.S. LNG, EVA expects Sabine Pass to continue operating at high utilization rates through all of 2017, as margins (at least into Europe) appear fat enough to keep exports flowing. Indeed, with Train 3 currently ramping up and Train 4 set for commissioning in June, U.S. exports will actually increase dramatically despite deteriorating market conditions.

To be sure, European gas prices (e.g., the UK’s NBP and NW Europe’s TTF) have sagged, with futures curves bottoming out in the summer, just as U.S. gas prices are rising (based on EVA forecasts; the NYMEX strip is less bullish). Yet, even at the narrowest point in mid-summer, the differential reaches only $1.14/MMBTU. Assuming U.S. LNG offtakers treat tolling fees as sunk variable costs (behavior so far has suggested this to be true), the spread between U.S. and European prices need only be ~$0.70/MMBTU to result in a positive netback margin.

U.S. LNG will also repeat last year’s summer dynamic of directing cargoes to South American markets and Mexico. Yet, given the modest size of those markets and the tremendous YOY increase of available U.S. LNG, other markets will need to soak up the excess supply.

In contrast to winter, Asia looks less promising a destination in the summer. Netbacks into Asia will likely be very tight. Prices for May Asian spot contracts have already fallen to $5.40/MMBTU. Given the higher shipping costs to Asia, prices falling below $5.20/MMBTU—a very likely outcome—would likely leave U.S. LNG out of the money into Asia for most of the summer.

Thus, the focus will inevitably turn to Europe. For the past few years, Europe has been ubiquitously labeled the global “backstop market” label. Yet in reality, imports have remained largely flat and very few U.S. cargoes in particular have reached European shores. Yet with low regional gas storage levels and attractive LNG prices, Europe will finally earn its backstop market distinction this summer and in doing so, become a welcomed destination for U.S. LNG. 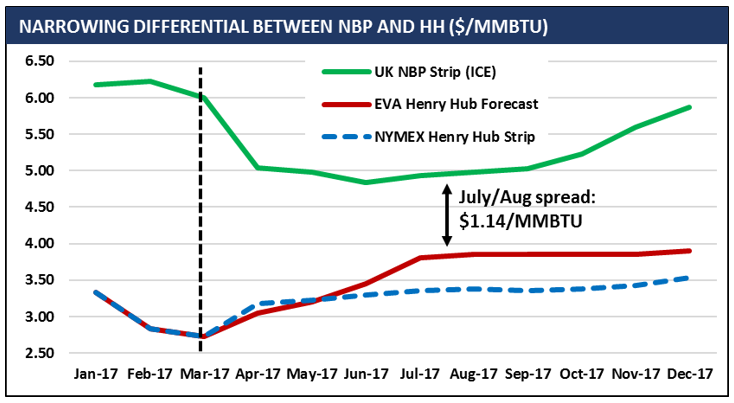