December gas prices for SoCal Citygate increased dramatically over the last six weeks. On Monday, the December contract settled at $6.21/MMBTU, its highest settle in four years and more than $2/MMBTU higher than its average through 2017. The prospect of higher gas prices has also pushed SP-15 December power prices to record highs. As noted in EVA’s daily Energy Trader Dashboard reports, there was upside risk for both power and gas prices heading into winter.

First, record high early-autumn temperatures drove an increase in gas fired generation. In turn, this reduced gas flows into storage, a dynamic exacerbated by the ongoing volume restrictions at the Aliso Canyon facility. As a result, total working gas inventories for the EIA Pacific region are not only below the 5-year average but are currently at the lowest levels (for this time of year) since at least 2012.

Second, there have been significant pipeline outages in all three of the primary gas supply zones feeding Southern California. To date, the outages have not had a meaningful impact on recent cash prices, but they have deepened concerns regarding the likelihood of serious local gas supply constraints emerging in the near-term.

More specifically, in the Wheeler Ridge Zone—the primary pathway for southbound flows within California—Line 235-2 and Line 4000 of the SoCal Gas System have been out of service since October. In the Northern Zone, both the Mojave and El Paso pipelines have recently announced unplanned maintenance starting in early December, raising the prospect of constrained westward gas flows from Arizona. Finally, in the Southern Zone connecting SoCal with Mexico, an unplanned outage at Otay Mesa has cut northbound gas flows since mid-November. 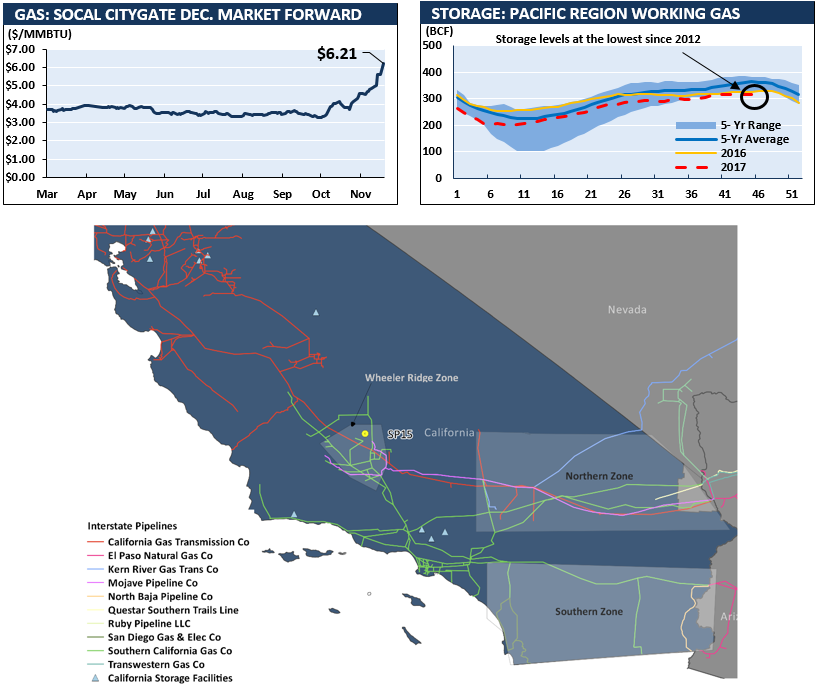 For all of these outages, the schedules for return remain uncertain. The pipeline issues, combined with low storage levels, have generated the increasingly bullish sentiment on SoCal gas prices seen over the past few weeks.

The prospect of higher gas prices has impacted power futures as well. Despite forecasts for relatively normal weather, December SP-15 prices have surged to record highs over the last week, reaching $57.50/MWh on Monday. Limited power imports from Northern California and the Palo Verde nuclear plant—which only recently came back online—have contributed to rising prices, as well.

Recent spark spreads suggest the market sentiment is fluctuating around the likelihood of sharply rising gas prices coming to fruition. In mid-November, spark spreads fell to $9.12/MWh, well below the 60-day moving average, indicating SP-15 power prices were being undervalued. More recently, the sentiment reversed, with spreads jumping to $14.06/MWh last weekend—above the 60-day moving average and suggesting the market is correcting the recent undervaluation of SP-15 power prices.

Looking forward, gas prices and spark spreads are likely to be governed by the evolving outlook for potential gas supply constraints. Recent delays in the El Paso maintenance schedule, for example, immediately narrowed SoCal Citygate December basis. Because the outlook remains uncertain for the time being, the corresponding risk premium is likely to keep spark spreads above 60-day averages. Spreads could expand further if the weather forecast shifts colder, especially if solar and wind output decline, as well.

For that reason, if the gas supply constrains persist, there remains potential upside risks to gas and power prices in Southern California.