Pain in the Permian: Renewable Edition

On March 8th, global oil prices fell by the largest amount since the 1991 Gulf War as Saudi Arabia abruptly ended its agreement with Russia to regulate prices through coordinated production cuts.  The move sparked fears of a price war and came amid price declines caused by the COVID-19 pandemic’s impact on global oil demand. As has been the case previously, when oil slumps, the Permian production region of the United States suffers. This time around, however, it might not be just West Texas producers that suffer. Renewable energy projects in the area could also fall victim to the latest Permian boom and bust cycle.   Figure 1 contains historical WTI spot prices.

The oil and gas industry increasingly has turned to renewables to meet their electricity needs and to act as a hedge against the region’s periodic power price spikes during the latest round of production growth in West Texas.  For instance, Occidental Petroleum ($OXY), an oil and gas corporation whose share price is down more than 60 percent since its last earnings report, in 2019 announced that it had signed a power purchase agreement (PPA) to buy the output  from a nearby 109-MW solar project as well as a plan to use supply power to one of its oil fields via a new solar project. Due to the projected growth in energy demand from the oil and gas industry in West Texas, a significant portion of renewable energy in the ERCOT queue is slated to be built near the Permian region.  Figure 2 contains a map of pending renewable projects in Texas as well as corresponding details, while Figure 3 contains a map from the Energy Information Administration highlighting the major U.S. crude oil-producing regions.  These two figures show how renewable developers are tending to site projects near the Permian region ahead of expected growth in demand for electricity. 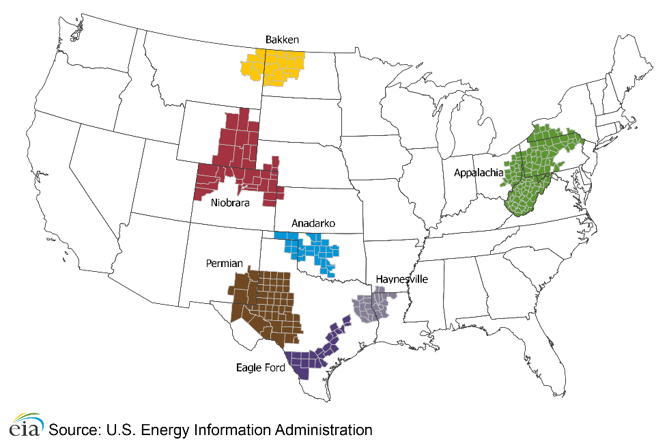 Power price futures for the West Zone of ERCOT, the power pool that serves 90% of the electric load in Texas, have fallen by roughly $10/MWh (15%) since mid-February despite delivered gas price futures at the Waha hub, located in West Texas, surging more than $1/MMBTU during that period.  Delivered gas price futures at Waha for the second half of the year jumped 50 cents/MMBTU on March 9th alone, the day after Saudi Arabia and Russia ended their production cut agreement.  The ERCOT West and Waha futures prices are provided in Figure 4 and Figure 5.

Generally, power prices move proportionally to gas prices.  In this case, however, EVA believes that power prices are falling amid rising gas prices because the low oil price outlook will reduce oil production and demand for electricity from the Permian oil and gas fields.  Lower power prices weaken the economics for many of these renewable projects, and reduced electricity demand from oil and gas production may even eliminate the need for some of them.

Some developers, however, remain optimistic about the short-term potential for solar projects in the region, as highlighted in EVA’s latest Monthly Renewable Energy Outlook.  Late last month, Lightsource BP, a renewable developer backed by the oil major, closed a $250 million financing package for a 260-MW solar project to be located northeast of Dallas.  The firm is reportedly optimistic that solar construction will still be possible amid the COVID-19 pandemic because of how workers are spread out during construction.

That said, distance between workers may not be enough to keep renewable projects moving forward amid the health crisis. This week, New York State issued a construction moratorium on all utility-scale renewable energy projects that are slated to come online after September 1st (another development complicating New York’s fight to attain its energy goals. Elsewhere, financing sources and supply chain logistics have been disrupted by the ongoing global response to pandemic. The short-term outlook for renewable energy deployment will depend on how quickly the industry is able to return to business as usual.

If you have any questions about how COVID-19 is impacting the renewable industry or the broader energy markets, please reach out to Rob DiDona at [email protected].