The 50 by 30 goal (50% renewable energy generation by 2030) was first proposed in New York Governor Cuomo’s 2015 State Energy Plan in June 2015, only months after New York’s arch rival, California, proposed the same goal. Both states are competing for the most stringent goal setting agenda in the union when it comes to cutting fossil fuel generation and CO2 emissions. Achieving the 50 by 30 goal in New York as well as saving the state’s nuclear plants from retirement will be detrimental to achieving any of the ambitious CO2 reduction goals the Regional Greenhouse Gas Initiative (RGGI) is currently discussing.

However, NY’s CES, first proposed in January 2016 and now finalized, includes a provision Pacific Gas & Electric in California[1] would have wished that their state regulators had included: Financial incentives for the carbon-free electric power generation from in-state nuclear power plants. This marks the first financial incentive on a state level that acknowledges the financial difficulties of nuclear power plants in merchant electricity markets (like NYISO), yet also the importance of carbon-free nuclear power generation to achieve any aggressive CO2 emission reduction goals.

In its CES, which builds upon the achievements of New York’s Reforming the Energy Vision (REV), NY’s PSC highlights numerous avenues for achieving the 50 by 30 goal, including:

The second major provision in the CES is aimed at providing financial support to NY’s up-state nuclear power plants that are struggling to remain profitable. Nuclear plant operators are paid so-called zero-emission credits (ZECs) for every megawatt hour of generation. These ZECs are based on the U.S. social cost of carbon, a future RGGI allowance price estimate, and NY Zone A (Western New York) power and capacity price forecast. The financial incentive runs through 2029 and is organized in 3-year Tranches. The ZEC price for Tranche 1, which runs from April 1 2017 through March 31, 2019, is set at $17.48/MWh.

Last November, then-owner Entergy Corp, announced it will retire its 838 MW James A. Fitzpatrick nuclear facility in Scriba, New York, by late 2016 or early 2017 due to the cost of maintaining the plant. After the final CES was announced and financial incentives were guaranteed, Exelon agreed to purchase the Fitzpatrick nuclear plant for $110 million and assume operation immediately, effectively saving it from retirement. The other struggling nuclear plant in up-state New York is Exelon’s R.E. Ginna. Late last year, Exelon reached an agreement with Rochester G&E to financially subsidize the plant’s operation to keep it from retiring until RG&E has found adequate replacement generation. Exhibit 1 shows the financial profile for the R.E. Ginna plant and the effect the revenue from the ZECs will have on the overall profitability of the nuclear plant. The other nuclear plant that will receive the incentive, while not publicly struggling financially, is Exelon’s Nine Mile Point, located next to Fitzpatrick at Lake Ontario. The only nuclear power plant in New York not benefitting from the CES is down-state Indian Point as it is not deemed to be “in the public interest” to keep the plant operating.[2]

Both major provisions of the CES – the 50 by 30 goal and the financial incentives for nuclear power plants – will significantly change New York’s future generation mix. In 2014, only about 27% of NY’s electricity consumed came from renewable energy sources (22% in-state and Canadian hydro), while 42% of NY’s energy needs was met by fossil fuels, as shown in Exhibit 2. As shown in Exhibit 3, growing the renewable share to 50% by adding more than 12 GW of wind and solar generating capacity, while retaining the state’s nuclear generating fleet, the fossil fuel share will shrink to less than 20% by 2030, reducing New York’s CO2 emissions from the power sector by 65% from 2014 levels at the same time.

The estimated CO2 emission reduction of 65% for New York is also essential for the Regional Greenhouse Gas Initiative (RGGI).[3] One of the main issues discussed during the 2016 RGGI program review, besides how to make the program CPP compliance-eligible and ready for other states to join RGGI as part of their CPP compliance strategy, is the adjustment of RGGI’s CO2 emission cap post-2020. Reducing the cap by either 2.5% or 5.0% for the years 2021-2030 are being discussed. New York’s success in achieving its ambitious 50 by 30 goal while preserving its nuclear fleet are essential for the RGGI region, should they elect to reduce the emission cap by 5% annually, as shown in Exhibit 4. 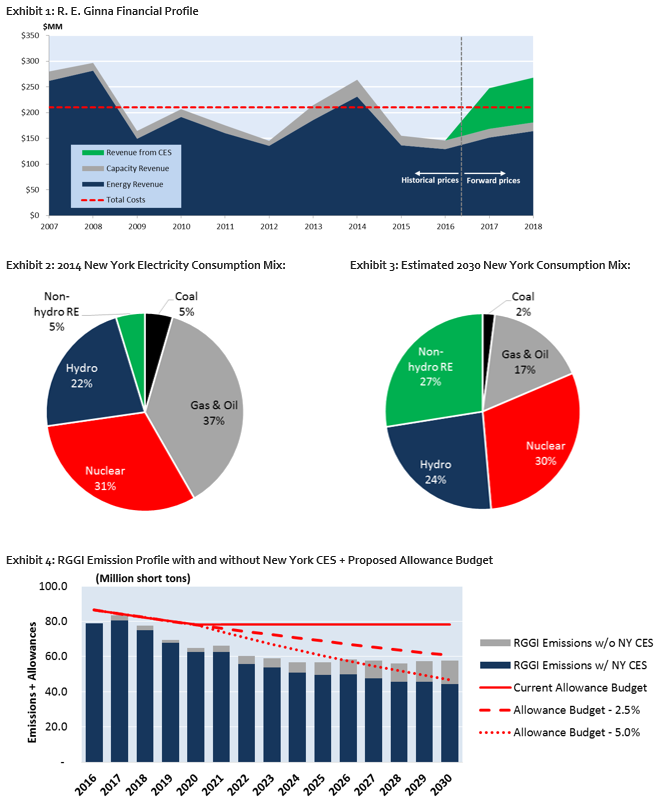 [1] On June 21, 2016 PG&E announced to close Diablo Canyon, California’s last nuclear power plant, by 2025, because it would become uneconomically to operate in a high-renewable power market without financial incentives.

[2] NY Governor Cuomo has long been an open critic of Indian Point due to its close proximity to New York City and its long list of environmental issues.