The Massachusetts Department of Energy Resources (DOER) published its long-awaited energy plan on December 12th. DOER had been directed by Governor Charlie Baker in a September 2016 executive order to publish a “Comprehensive Energy Plan” (CEP) for the commonwealth.

The CEP articulates the state’s high-level strategy to meet its commitment to reduce GHG emissions by 25 percent below 1990 levels by 2020 and by 50 percent by 2050. The CEP is intended to be a follow up to the Clean Energy and Climate Plan (CECP), which originally articulated the commonwealth’s strategy to meet the 2020 goal.

DOER identifies Massachusetts’ high electricity costs, relative winter price volatility, reliance on LNG and fuel oil to meet peak demand during cold snaps, and fossil fuel use in the less regulatable heating and transportation sectors as challenges towards meeting its goals. To overcome these challenges, while reducing emissions the plan introduces and performs analysis on five evolving scenarios: sustained policies (the baseline), high renewables, high electrification, high renewables and electrification, and an aggressive conservation and fuel switching case that also includes the assumptions from the high renewables and electrification scenarios.

The Sustained Policy scenario, which is fairly aggressive compared to the average state level energy policy, includes but is not limited to individual policies such as the commonwealth’s Energy Storage Initiative[1], the Solar Massachusetts Renewable Target[2] (SMART), and Governor Baker’s Act to Promote Energy Diversity[3].

The High Renewable scenario includes all of the sustained policy assumption but increases clean generation to 65 percent of the retail load (as compared to 45 percent) and increases storage from 200 MWh to 1,600 MWh.

The High Electrification scenario focuses on the impacts of changing consumer technologies in the transport and thermal (heating) sectors. In the transport sector the modeling incorporates the state’s Zero Emission Vehicle Memorandum of Understanding (ZEV MOU) target of 300,000 EVs by 2025 and 1.7 million EVs by 2030. In the thermal sector the analysis increases the penetration of heat pumps to 25 percent and 10 percent in oil-heated and gas-heated buildings respectively.

The High Renewables and Electrification scenario incorporates the supply and demand side assumptions into one case—considering the impact of electrification in the presence of high renewable and storage penetration.

The Aggressive Conservation and Fuel Switching scenario focuses on dramatically reducing baseload and peak demand while also greatly increasing storage and electrification in the transport sector. One key assumption is that “peak demand is reduced through a total of 2 GW of storage by 2030,” which is a 250 percent increase from the high renewables scenario.

Because the winter months are the most critical and difficult months for the grid in Massachusetts, the impact of the New England Winter is analyzed extensively for the various policy scenarios.

The CEP’s conclusions focus on the impact of the various scenarios on household energy expenditures, residential retail rates, CO2 reductions, and oil and LNG demand during peak winter days.

Figure 1 Scenario Analysis as Presented by the MA DOER

The analysis demonstrates some interesting findings, including the idea that there are allegedly cost synergies in an energy system with both high electrification and high renewables. A more granular look at the CEP’s analysis breaks out the impact of the various scenarios on components of retail rates.

Figure 2 Scenario Analysis as Presented by the MA DOER 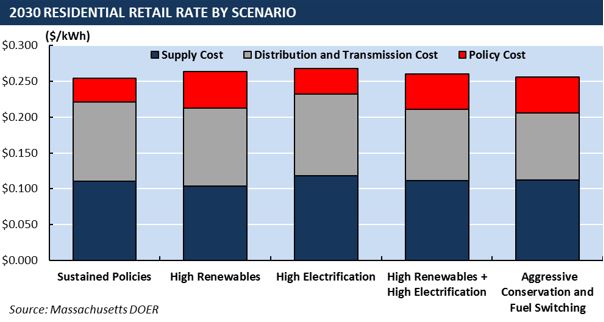 Notably, while the “policy cost” increasing in every scenario, the study finds that the combination of renewables and electrification could reduce transmission and supply costs.

EVA has not performed an extensive review of the modeling performed for this analysis and so will not comment on the quantitative aspects of this report. Rob Jennings, a Senior Consultant on EVA’s power team, noted that, “Massachusetts’ new energy plan demonstrates the state’s commitment to reducing its dependence on natural gas in order to manage energy costs and avoid reliability issues.  With little in the way of other types of thermal generation available, Governor Baker and the DOER have recognized that renewables and battery storage will likely play a critical role in the commonwealth’s future.”

Massachusetts’ focus on how the power sector, transportation, and thermal sectors intersect, especially in increasing resiliency while decreasing fossil fuel dependence, could become the norm as other state houses consider their own energy futures.