Despite a strong consensus that the global LNG market is headed into a period of considerable oversupply, developers continue seek every opportunity to garner commercial momentum for their proposed LNG projects.

Binding offtake contracts remain a necessity for new LNG projects. Given the scale of the investment and length of the construction timeline, proposed projects have little hope of moving forward without first securing buyers for all or at least most of project capacity.

Increasingly, a first step toward securing buyers is to arrange a few Heads of Agreements (HOAs) with potential buyers. The agreements are typically for a set volume over a period of 20-years.

Often deemphasized in the press release, however, is that the deals are non-binding, meaning either party can abandon the agreement at any time. The objective is for the developer and buyer to slowly work together to understand the other’s perspective and hopefully, arrive upon mutually beneficial terms. If successful, the HOA can be converted to a binding, long-term offtake contract, usually in the form of a Sales & Purchase Agreement (SPA), or as is common in the U.S., a Liquefaction Tolling Agreement (LTA).

Several proposed projects in the U.S. have recently made announcements touting a series of new offtake HOAs. In mid-2016, NextDecade announced it had signed a combined 14 MMTPA of HOAs for its proposed Rio Grande LNG project. Shortly thereafter, SCT&E announced it had signed four HOAs with Asian buyers for a large chunk of capacity at its Monkey Island project. Most recently, in January, the developers of Texas LNG announced four HOAs covering the full capacity of that project’s first phase (2 MMTPA).

The announcements merit serious consideration as signs of genuine progress, but thus far, none of the HOAs have been converted to binding offtake agreements. Further, in most instances, the project developer does not identify the buyers included in the deal. The latter, in particular, suggests the deals are very preliminary in nature.

Over the last several years, the conversion rates of HOAs into binding SPAs have been quite low. The Jordan Cove project in Oregon announced HOA with unidentified buyers as far back as 2014, but has yet to finalize them. Magnolia LNG also has a series of HOAs, originally signed in 2015, which have made little progress (though the company does have a binding agreement with Meridian LNG). HOAs at several other projects appear to have met a similar fate.

There is certainly value in sitting at the table with any potential buyer and discussing terms, even if that buyer does not eventually sign on the dotted line. Cheniere did this for its first phase of Sabine Pass, announcing several HOAs shortly after proposing the project in 2011. Ultimately, all of those HOAs were abandoned, but the experience likely allowed the company to hone its marketing strategy and was a valuable precursor to the eventual raft of SPAs signed in advance of FID in 2012.

The more recent set of HOAs at proposed projects will be particularly difficult to convert to binding agreements because there are so few buyers interested in signing up for new LNG in the current market. The HOAs are effective publicity but many developers begrudgingly admit that the impending glut renders a 2017 FID unlikely. Most are targeting 2018 FID at the earliest, and are merely hoping to establish themselves as leading contenders for new supply that will be needed when the market balances in the early-2020s.

To this end, a few of the HOAs go beyond a simple tolling agreement as developers scramble to secure buyers in a loose market. LNG Limited’s most recent HOA for Magnolia LNG included a clause requiring it to assist in the development of an associated regasification terminal on the East Coast of India. Similarly, NextDecade is cooperating with Flex LNG to provide full value chain options for interested buyers. Developers are also willing to offer cargoes DES (i.e., they’ll handle the shipping) and alternative pricing options, including linkage to European gas hubs.

Increased optionality may effectively lure in buyers at a few projects, but it’s notable that even if the recent set of HOAs were converted to binding SPAs, several of the buyers in question have limited experience in the LNG business and are quite different from traditional offtakers. Few offer the long-term creditworthiness typically required by financiers to underpin a new LNG project.

The issue is exacerbated by the fact that for many of the projects in question, the developers themselves are equally inexperienced and offer largely non-existent balance sheets. Asking lenders to finance multi-billion dollar projects based on inexperienced buyers and sellers is likely a bridge too far.

Thus, few of the recently announced HOAs are likely to amount to anything other than a headline. Still, as the market heads into a period of oversupply, nearly every part of the LNG value chain is in a state of considerable flux. As a result, the negotiations associated with HOAs may be critical educational opportunities for buyers and sellers, as both sides pursue mutually beneficial agreements during this highly uncertain time. 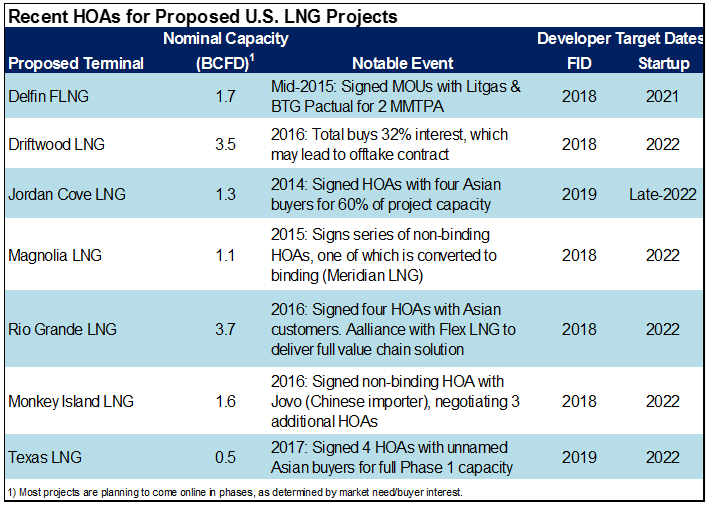