On September 7, 2016 the EPA finalized an update to its Cross-State Air Pollution Rule (CSAPR) ozone season program. The CSAPR Update Rule adjusts state budgets to maintain the 2008 National Ambient Air Quality Standard (NAAQS) for Ozone (75 ppb). While state budgets have increased for most states from the proposed rule, some states and owners are still projected to be in need for allowances, keeping the CSAPR allowance market alive for the near future.

On September 7, 2016, EPA Administrator Gina McCarthy signed the final CSAPR Update Rule. Originally proposed  on December 3, 2015, the CSAPR Update Rule addresses (1) the interstate transport for the 2008 Ozone NAAQS (75 ppb) and (2) the July 28, 2015 D.C. Circuit remand of 11 states’ CSAPR ozone season NOx state budgets. The state budgets established under the final rule will go into effect with the start of the 2017 ozone season on May 1, 2017. Under the final rule, 22 eastern U.S. states are covered, as shown in Exhibit 1. Updated emission modeling has shown that NC, SC, and FL no longer contribute significantly to ozone levels in downwind states and are therefore excluded from the CSAPR Update Rule.

In its final rule, the EPA excluded all impacts of the Clean Power Plan, a major change from the proposed rule. In the proposed CSAPR Update Rule, EPA used its CPP Rate Scenario as an emission baseline scenario, therefore including almost 70GW of (unannounced) coal retirements in 2016. This change, along with its revision to the achievable NOx emission rate for SCRs (from 0.075 lb/MMBtu in the proposed rule to 0.100 lb/MMBtu in the final rule), resulted in an increase in state allowance budgets for 15 of the 22 states compared to the proposed rule. Seven states (IN, KS, KY, MD, MI, OK, and TX) are facing higher budgets than originally proposed. Overall, the final 2017 CSAPR budget, while it increased by more than five percent from the proposed rule, still represents a more than 20 percent reduction from NOx emissions during the 2015 ozone season.

Exhibit 2 shows the final 2017 CSAPR state budgets, each state’s NOx emissions during the 2015 ozone season, as well as the exceedance of 2015 emissions over the 2017 state budgets. While some states have already achieved (or are very close to achieving) the 2017 emission limits, others, such as Pennsylvania, will be required to reduce their NOx emissions significantly. Likely the first compliance strategy for most plant owners is to return idled or underperforming SCRs to full operation. For example, Pennsylvania coal units with installed SCRs have averaged more than 0.25 lb/MMBtu over the last two years. Returning those clearly underperforming SCR systems (close) to previously achieved NOx emission rates will reduce PA NOx emissions by more than 70% without any other changes to plant operations.

As shown in Exhibit 3, the majority of coal plants covered under CSAPR already have SCR systems installed. More than 90% have installed either SCR systems of other forms of advanced NOx controls. However, more than 18 GW of coal capacity does not have advanced NOx controls and are therefore at risk of being required to install additional controls, reduce generation, or switch to (or co-fire) natural gas.

Overall, states covered under CSAPR are projected to emit less than their CSAPR Update Rule state budgets and over time establish an allowance bank. However, not all states are expected to meet their allowance allocations, as shown in Exhibit 4. Eight states are projected to emit above their state budgets at least once over the next five years. Seven of those might be able to comply through allowance purchases. Under its recently finalized Arkansas Regional Haze FIP, the EPA is requiring four Arkansas coal units at White Bluff and Independence (totaling more than 3.4 GW of capacity) to install state-of-the-art NOx combustion controls by March 2018. Should the plant operators of White Bluff and Independence fail to meet EPA’s very stringent timeline, Arkansas will need to reduce in-state NOx emissions significantly before it can offset emissions in exceedance of their state budgets by purchasing allowances from the open market.

The extent of the electric power market disruption and the trading price reaction from this rule will ultimately depend upon allowance liquidity and state program implementation rules.  While the market should have a net seasonal NOx allowance surplus, how many utilities holding these allowance surpluses will be willing to offer them for sale on the open market remains to be seen.  More than 50 percent of the projected utility surplus allowances will be needed to meet the projected allowance demand from those with allowance deficits.  However, such a high portion being available in the open market has not been reached in the 24 year history of the Acid Rain allowance trading market.  For that program, reasons given for utilities not offering their surplus allowances for sale included lack of financial incentives (for many, all trading profits would go to ratepayer and all risk to the utility shareholder), providing greater system operational flexibility, wish to sell power in lieu of allowances, incurring administrative expenses for very limited potential revenues, and concerns over public perceptions of selling “rights to pollute”.  These same issues could also extend to reducing the open market allowance supply in the CSAPR ozone season NOx market.

Another issue will be the adoption of any state program trading rule limitations to assure that the state budget assurance limitations are met.  One approach would be to apply the same assurance limits on each state’s utility system.  Such an interpretation would limit the number of allowances an individual utility could purchase for compliance and force some internal generation displacement to comply.

In conclusion, while most states are projected to be in compliance with their respective updated NOx state budgets, assuming SCRs are returned to full operation, about one fourth of owners with generating assets covered under the CSAPR Update Rule are expected to emit above their level of allocated allowances. This guarantees allowances for the CSAPR Ozone market will trade at a premium for the near future until a large enough bank of allowances has been established, additional advanced NOx controls have been installed due to other environmental regulations (e.g. Regional Haze), or changes to the regulatory framework of the program have been made. 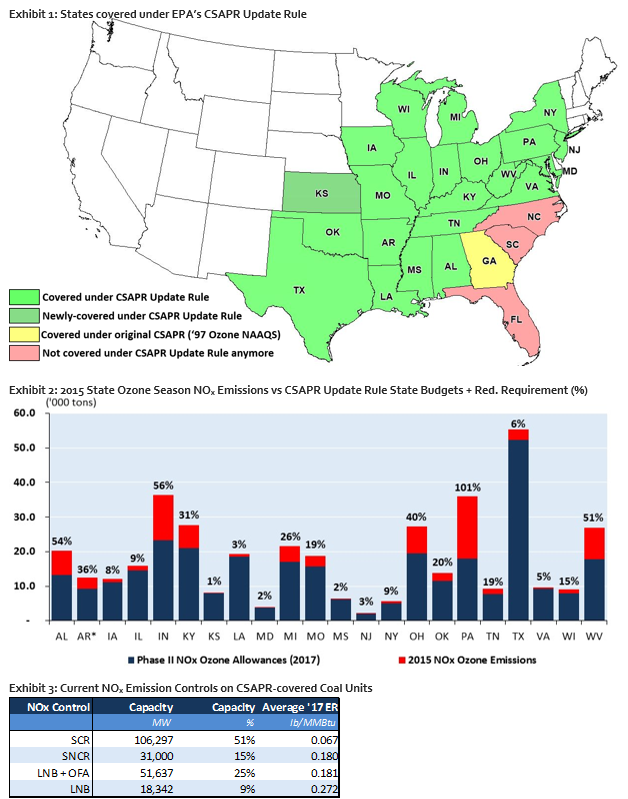 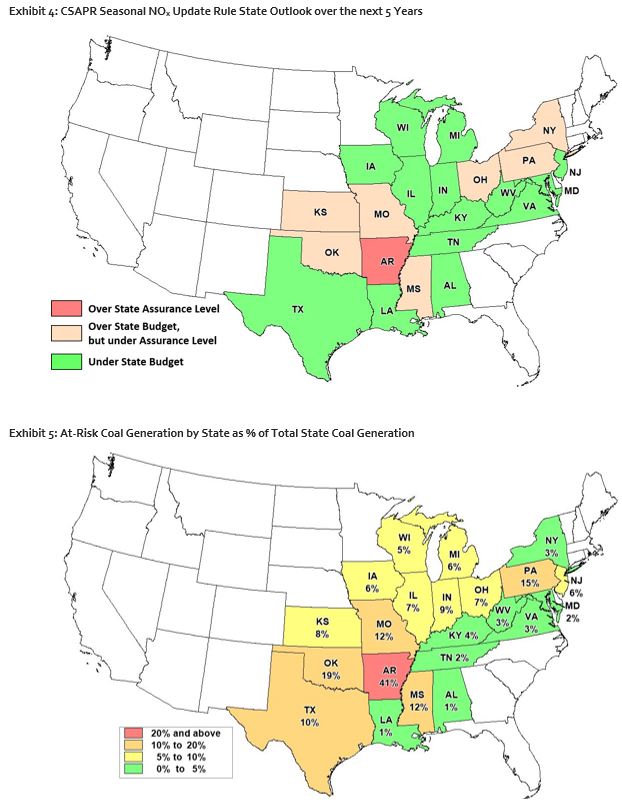