EVA has published a special report analyzing the power-sector impacts of New York’s “Green New Deal” legislation. An executive summary of the report can be read below.

On July 18th, 2019, Governor Andrew Cuomo (D-NY) signed into law the Climate Leadership and Community Protection Act (“CLCPA”). The law, which was in part inspired by the Green New Deal policy concept, commits the United States’ fourth-most populous state and third-largest economy to source 70% of its electricity from renewable resources by 2030, and 100% of it by 2040. The law further calls for a net emission-free state economy by 2050.

The CLCPA allocates planning responsibilities to a 22-member “Climate Action Council” (NYCAC) and further stipulates that the Council’s forthcoming “scoping plan” must include specific elements.  Some of the more significant elements include:

Energy Ventures Analysis (“EVA”) conducted a preliminary analysis of the impacts of the CLCPA on the power sector using a heavily customized version of the Aurora power dispatch model, which EVA licenses from Energy Exemplar.

EVA’s modeling indicates that the CLCPA will drive upwards of $115 billion[1] in investment in new resources by 2040 as the state transitions from a gas-dominated capacity mix to one that is much more renewable-focused.  By 2030, solar and wind will make up 39% of the installed capacity in the state, with nuclear and hydro facilities account for an additional 14%.  By 2040, the share of wind and solar leaps to 83%.  Meanwhile, fossil resources’ share of the capacity mix will decline from 66% in 2019 to zero in 2040 as the CLCPA effectively bans generation from carbon-emitting resources. 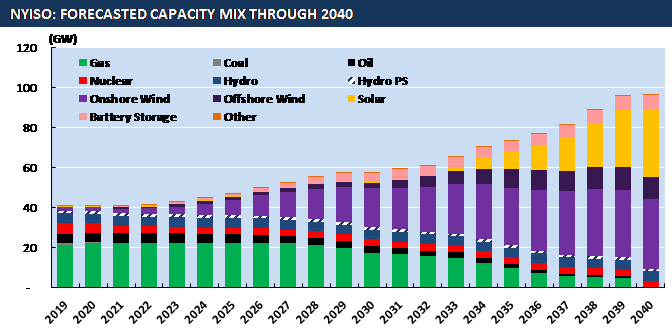 [1] This estimate does not include the cost of building new transmission lines.