With several states and a number of utilities adopting decarbonization goals, carbon capture and sequestration (CCS) and carbon capture, utilization and storage (CCUS) may find a role in an energy transition as coal and gas plants retrofitted with either technology could continue to operate.

What is the 45Q tax credit?

45Q is a performance-based tax credit incentivizing carbon capture and sequestration or utilization. Much like with the production tax credit (PTC) for wind, under 45Q, qualifying power generation and industrial facilities can “generate” a tax liability offset per captured tonne of carbon dioxide. The amount of the credit per tonne varies based on if the facility sequesters the carbon in permanent geological storage or captures the carbon for “utilization” in enhanced oil recovery (“EOR”) or other processes.

The original Section 45Q tax credit was enacted by the Energy Improvement and Extension Act of 2008 to incentivize the reduction of carbon dioxide (CO2) emissions from qualified facilities and support redeployment of CO2 energy through efforts such as enhanced oil recovery (EOR). Section 45Q tax credits were initially limited to 75 million tonnes. The Bipartisan Budget Act of 2018, enacted on February 9, 2018, substantially modified the Section 45Q tax credit to increase over time, expanded the credit to include other carbon oxides and eliminated the previous 75 million tonne cap. The enhanced 45Q credit linearly increases from $22.66 per tonne of carbon in 2017 to $50 per tonne in 2026 for carbon sequestration, and from $12.83 per tonne in 2017 to $35 per tonne in 2026 for EOR and other uses. The tax credits are provided for 12 years. An electric generating facility can utilize the credit if it removes at least 500,000 tonnes of carbon from the atmosphere during the taxable year. In June, the IRS proposed additional rules of commercial importance to project owners and potential investors, which is detailed in the latter half of this post.

Although several emission-intensive industries (chemical or fertilizer production, natural gas processing) have taken to the CCUS technology, the coal and gas-fired power plants in the power sector face a greater technical challenge capturing the carbon because of the lower concentrations of CO2 in the emissions stream. With the successful retrofit of CCS on the W.A. Parish Plant in Texas (referred to as Petra Nova) and increased development funding from the Department of Energy, interest in CCS retrofits have expanded.  The Petra Nova plant came online in 2017, notably on-time and within budget.  The Petra Nova CCS project captures approximately 90 percent (or roughly 1.4 million tonnes) of the CO2 from a 240 MW slipstream of flue gas. The captured CO2 is compressed and transported through an 80-mile pipeline to an operating oil field where it is utilized for EOR. Exhibit 1 provides a list of large-scale CCUS power generation projects currently under operation or advanced development within the United States. 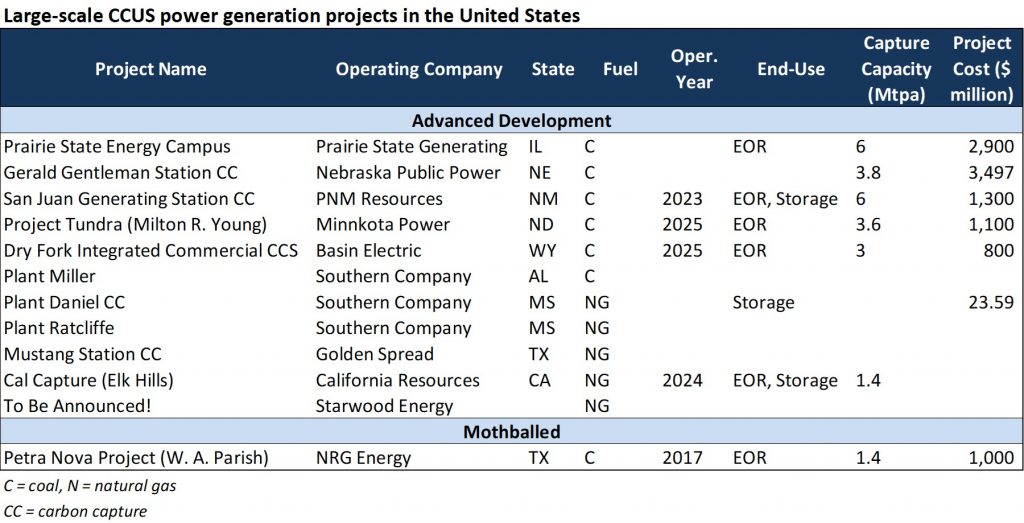 The 45Q tax credits, like the wind protection tax credits, are valuable to tax-paying entities, referred to as tax equity.  The sale of tax equity is one major source of project funding.

Harnessing CCUS-friendly policies like 45Q could help flip the economics for the electric power sector back in favor of gas and coal generators. Exhibit 2 shows the capital costs of CCUS retrofits to existing coal power plants dropping to ~$1000/kW by 2030 as technology learning rates and economies of scale drive down the overall cost of capture. Deep decarbonization goals may require a diverse energy mix beyond just wind, solar and battery storage resources to ensure reliability, and CCUS could play a role as a dispatchable, backup alternative.

Notably, successful CCUS retrofit of existing power plants could potentially extend their lives. Since 2015 more than 70 GW of coal-fired generating capacity has retired in the U.S., and new coal plants continue to be added to the retirement roster due to sustained low natural gas prices, increased renewable generation, and high environmental compliance costs.

Although 45Q requires that eligible facilities begin construction by 2024 project owners are not deterred, as several commercial-scale CCUS projects are in the project pipeline. Companies like Enchant Energy for the San Juan coal plant and Minnkota for the Milton R. Young coal plant are hoping to build on the critical operational experience provided by the retrofit of Petra Nova and Boundary Dam coal-fired power plants. Decarbonization goals could result in retrofits for the growing fleet of combined-cycle gas plants as well, which is consistent with the CCGT plants included in the pipeline.

Given that these retrofit projects are highly capital-intensive and the pandemic has created some uncertainties in capital markets, there may be an extension beyond the January 1, 2024 deadline. EVA assumes that the time limit will be extended through 2030 to provide utilities or developers with more time to finalize investment decisions amidst the current market uncertainty.

Although reliable financial data sources are sparse, EVA’s analysis of 45Q suggests that Enhanced Oil Recovery (EOR) is currently more attractive to developers than geological storage despite the lower tax credit for EOR. This preference appears to be due to economic reasons and the difficulties associated with sequestration.  While the increased 45Q credits in the permanent storage scenario (b) partially offsets the lack of CO2-EOR sale revenue, the incremental cost of storage makes it a less attractive option than EOR. 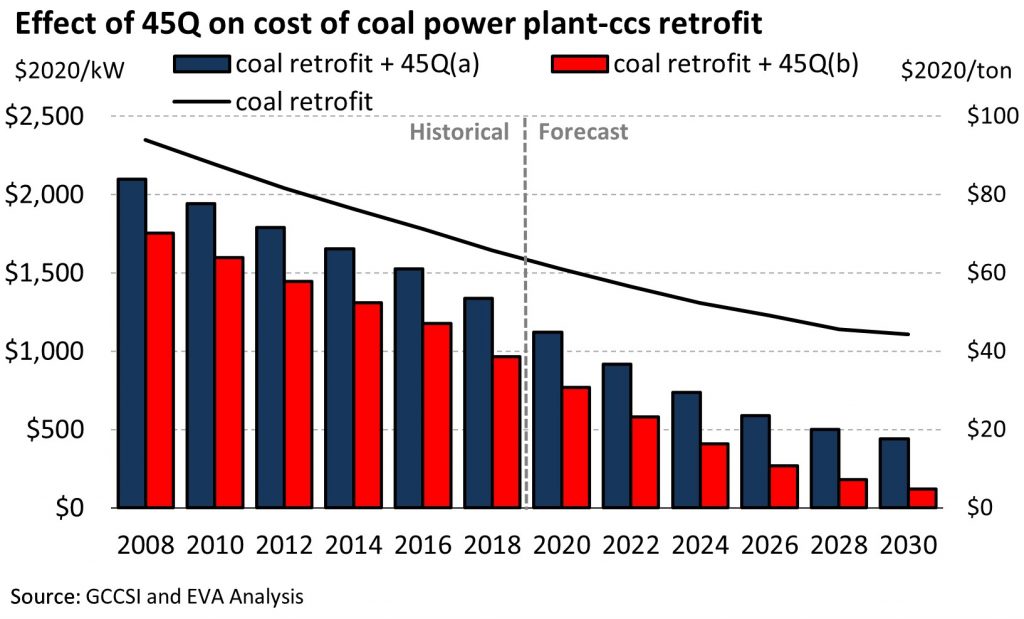 Other Requirements and Key Elements

Following the “Carbon Guidance” released on Feb 19th 2020, shortly after (June 2nd 2020) the IRS published the long-awaited proposed regulations regarding the tax credit to provide additional clarity to eligible taxpayers. Some of the notable changes proposed in 2020 include:

The proposed rulemaking was largely welcomed by project developers; however, some amount of risk regarding the 45Q credits encouraging CCUS-related market activity remains. With the pandemic hitting pause on new investments, tax equity investors could be hard to come by, as uncertainty persists.. Additional regulatory changes, in the form of a timeline extension or direct cash payments instead of credits, may be needed to drive investments in this market.