The latest cap-and-trade allowance auction held in May displays worrisome results. Of the almost 78 million allowances available in the auction, a mere 8 million allowances were sold, or 11%. The weighted average bid-to-offer ratio for current vintage and future vintage allowances plummeted from an average 1.36 over the last three years to 0.95 and 0.11 (!!!) in the first two auctions of this year, respectively. While expected to raise over $500 million for California’s greenhouse gas reduction fund, the proceeds from the latest auction barely broke the $10 million barrier, far less than any previous auctions’ proceeds. Over-the-counter allowance prices have lost more than $0.40 since the beginning of the year, a reduction not seen since the first year of the program. Available allowances versus allowances sold and the weighted average bid-to-offer ratio as well as the greenhouse gas reduction fund proceeds and over-the-counter California allowance prices are shown in Exhibit 1 & 2, respectively.

The reasons for this market collapse are multifold.

First, the program faces significant legality issues that might derail the program in the near future. In 2012, after the program was created but before it held its first auction, the California Chamber of Commerce along with other business groups filed a lawsuit alleging, among other things, that allowance auctions are a tax and thus illegitimate, as they were not passed with a two-thirds majority, per CA Prop 13. That argument was rejected by a California Superior Court judge in 2013, but it has since been appealed. Recently, the appellate court judge presiding over the case issued a document asking some pointed questions of the state, among them: exactly how a ruling against the program might be implemented by the state. If this line of questioning can be seen as a potential ruling against the state remains debatable.

Second, while many in the energy industry expect California’s cap-and-trade program to be used as the state’s compliance strategy for EPA’s Clean Power Plan, its future remains uncertain. As it is set to expire by the end of 2020, the program would need state legislature’s approval to continue beyond the expiration date, and as of now, it appears that the program does not have enough constituencies in the legislatures backing the program for it to continue.

Last, covered entities and speculators are holding more allowances than currently needed to cover California’s CO2 emissions, resulting in a supply-demand balance issue that has been growing in every auction since last year, and is expected to keep increases in allowance prices near the price floor through 2017.

About half of every auction’s proceeds is supporting California’s greenhouse gas reduction fund (GGRF), which is used to finance various state and local programs aimed at reducing the state’s GHG emission profile. For example, 25% of the GGRF is used for the country’s largest infrastructure project, the $64-billion bullet train championed by California’s Governor Brown. The latest auction produced just $2.5 million of the $150 million expected for the train project. If auction results remain weak for the foreseeable future, required state and federal funding will soon run out and potentially put an end to the project. Other projects also funded by the GGRF, like California’s clean vehicle rebate program, which is the main driver behind achieving the goal of having 1.5 million zero-emission vehicles on the roads by 2025, are also seeing significant budget cuts. Should these programs not achieve the expected GHG emission reductions, California’s ultimate goal of reducing its GHG emissions to 1990 levels by 2020 is in serious jeopardy. 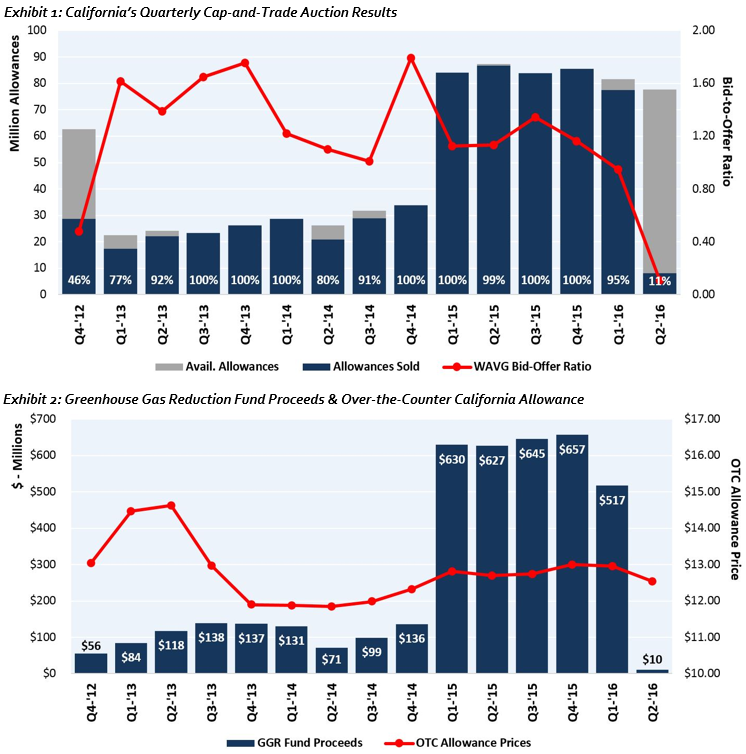