Annual U.S. Sulfur Dioxide (SO2) and Nitrogen Oxides (NOx) emissions from coal-fired plants have sharply declined over the past two decades. Relative to the 2000 levels SO2 and NOx emissions were 88% and 82% lower in 2018, respectively. Total SO2 emissions fell from ~11 million tons in 2000 to ~1.2 million tons in 2018.

EVA’s analysis of CEMS data indicates these SO2 and NOx coal plant emission reductions were largely driven by technology retrofits as opposed to coal retirements during this period. The enactment of various clean-air programs by the U.S. Environmental Protection Agency, and the resulting emission controls put in place catalyzed this change, as emission rates dropped significantly. In the near-term though, these dynamics have flipped as natural gas and renewables continue to undercut coal prices, influencing early retirements. 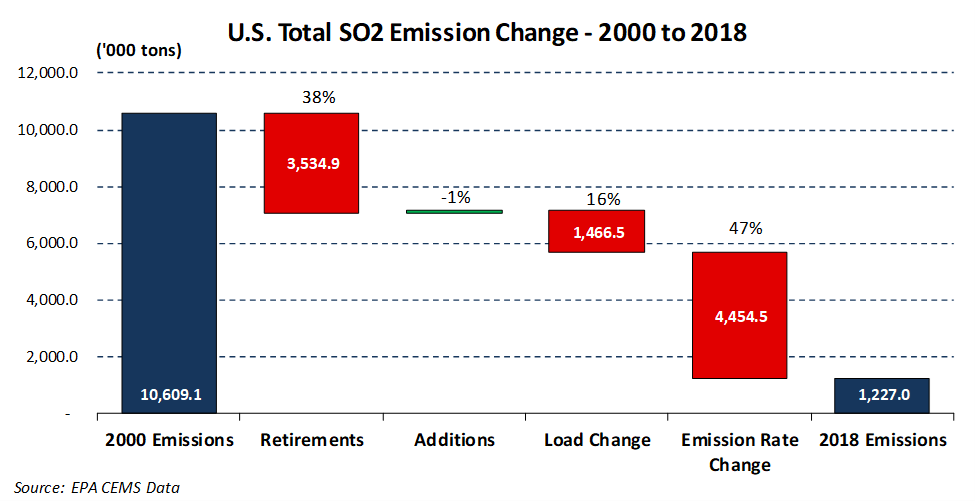 The factors contributing to declining SO2 and NOx emissions can be categorized in three categories: emission rate change by way of installed emission controls, load change, and retirements. EVA summarizes developments in those categories in the below paragraphs.

Installed emission controls: A major portion of the coal fleet were retrofitted with scrubbers or flue-gas desulfurization systems and selective catalytic reduction controls following the passage of the Acid Rain Program, NOx Budget Program, Clean Air Interstate Rule, Cross-State Air Pollution Rule, Mercury Air Toxics Standard and National Ambient Air Quality Standards. As a result, the SO2 and NOX emissions reduction through the late 2000s were more an outcome of the plants employing strategies to reduce emissions than the reduction in coal burn itself. Ohio, the most-polluting state, reduced its SO2 and NOX emissions by half in 2015 as compared to 2000 levels, just through retrofits. Exceptions to this were in states like New York, Massachusetts and Delaware which retired most of their coal units in prior years, due to their commitments to transition to a cleaner energy portfolio through the Regional Greenhouse Gas Initiative (RGGI) and Renewable Portfolio Standards (RPS).

Lower Utilization of coal-fired plants: Some power plants reduced coal consumption or substituted coal with other fuels, which subsequently reduced their generation and emissions. From 2000 to 2018, coal-heavy states like Ohio and Pennsylvania observed a notable decrease in SO2 emissions (around 130,000 tons) due to reduced coal burn.

Although there were a few new coal plants added to the electric grid in the past two decades, their net effect on SO2 and NOX emissions was negligible.

For further insights about specific environmental policies, markets and emission controls, refer to our Quarterly Environmental Report. Our Quarterly Coal Report takes a deep dive into issues leading industry issues like how market forces are driving some plants to install emissions controls.